ONLINE - web site address will be sent to ticketed participants 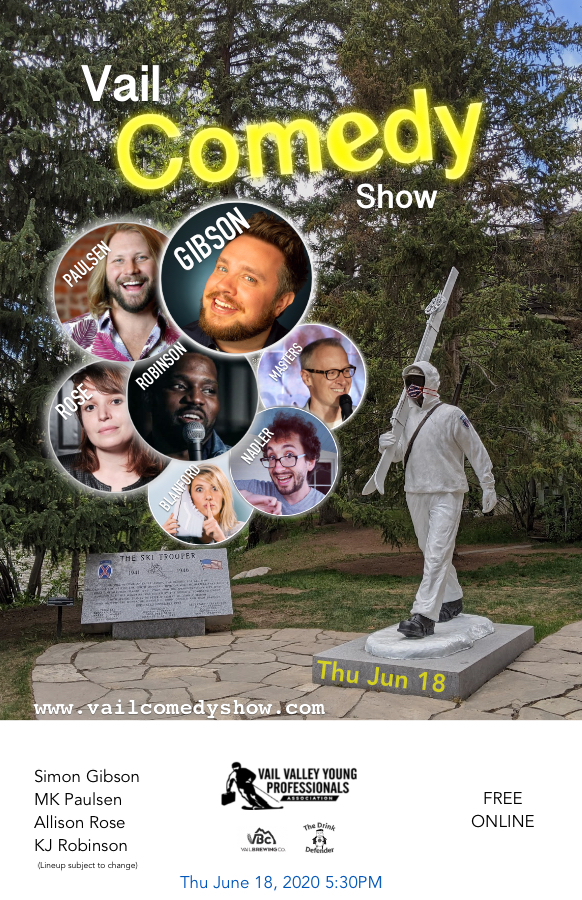 Simon Gibson: Simon Gibson is an LA-based comedian, actor and writer, who was selected to be a New Face at the 2018 Just For Laughs Festival in Montreal. He recently appeared on NBC’s “Last Call with Carson Daly”, and can currently be seen on the Amazon docu-series Inside Jokes. Originally from Portland, OR, Simon brings a dynamic combination of high-energy and physicality to the stage, performing at clubs and festivals across the country. www.simongibsoncomedy.com MK Paulsen: Originally from a small town in Texas, M.K. Paulsen is a Los Angeles-based comedian who has appeared on numerous comedy festivals across the country including the Moontower Comedy Festival, the Bridgetown Comedy Festival, Hell Yes Fest, and the 202 Comedy Festival. You can see him on the Amazon docu-series Inside Jokes. www.mkpaulsen.com Allison Rose: A Comedy Works regular originally from small town Kansas, Allison Rose has been featured on the Red Clay, 208, Savage Henry, and Yuck Fest comedy festivals. KJ Robinson: KJ Robinson is from Detroit and has performed at the Stoopfest comedy festival and Brooklyn Comedy Festival. Katherine Blanford: Katherine Blanford tours all over the Southeast and has opened for Jeff Foxworthy, April Macie, Ron White, Matteo Lane, Craig Gass and Paul Hooper. Katherine has featured at The 10,000 Laughs Fest, Laughing Skull Comedy Festival, and Red Clay Comedy Festival. www.katherineblanford.com Charlie Nadler: Charlie Nadler owes his existence to a TV show; his parents met while writing together on Laverne & Shirley. He has released two albums and told jokes around the world in clubs, festivals, bars, country clubs, teen centers, basements, attics, and one barber shop. He now resides in Massachusetts. Elon Altman: Elon Altman is a NYC based comic who has performed with Dennis Miller and Demetri Martin and headlined Caroline's on Broadway as part of their Breakout Artist series.www.elonaltman.com Mark Masters: Mark Masters is a Denver, Colorado based comedian. He hosts and produces the monthly Vail Comedy Show which has showcased touring comedians Christie Buchele and Derrick Stroup. He has a podcast and web series, creatively named "Mark Masters", and you can buy the story of his comedy journey "Not Good Yet" almost anywhere books or audiobooks are sold. www.markmasters.co As always we may have some special guests dropping in too, so arrive early for good seating, and be ready to let loose by the published showtime. Lineup subject to change.

You can support our comics!